“Whatever floats your boat” is a saying we all have come across when we have either succeeded in proving a point or in complete refusal of an existing reality. To stop and wonder what we are truly floating on, or where we are sailing to is a musing not often dwelled on. The author has set sail along this very course in this book, questioning and guiding through the ocean of life, the oars of actions and the vision of the final shore ahead. The book takes the reader through a journey of soul-searing questions, habitual cultivations, therapeutic resolutions and a methodical breakdown of thoughts and their impact on its thinker – you.

In the harrowing realities of world issues, mental health seems profoundly insignificant – an intended oxymoron – in the web of lives far and near. When one does realise or detect the slightest hint of this within themselves, life becomes a juxtaposition of ‘to be or to not be’ mentally ill – which takes course further as acceptance or denial. What one does not realise however is the existence of the question validates the existence of an affirmative answer within itself. When we were young and falling ill was an excuse for an off-day from school, our minds would look forward to the pampering and the rest more than recovering back to health. This is a common anecdote from every person’s childhood. What we failed to note is how this grew with us over time, and how our minds evolved, changing its reception to the problem. “Humans are mind, body and spirit” as the author says in the book. While one is ill, the other cannot recoup on its own. So how does one navigate from here when the mind is what needs pampering? The compartmentalization of the book addressing these topics makes it easier for one to read through and relate to, thereby leading to its answer further on.

Has one ever pondered on why we walk on two legs instead of one? Two eyes, two nostrils, ears, sets of teeth, fingers, toes? Why symmetry is so appealing? Why an inhale comes with an exhale? The crux of the universe and its functionality revolves around this – balance. It is when this balance goes awry that one faces issues. The anatomy of life is no different. To simplify is further, let us take a deck of cards. Building the infamous house of cards has made us all visit the ugly sentiment of frustration at least once. We are told that the house of cards is all about intermittent balance. Each row supports the one above, each card supports a row, what about each card? Do we ever investigate that when a house of cards fails? A scarred bend or a chipped edge automatically ensures the collapse of the deck.

The hierarchy of the world is seen through a similar perspective in the book. A scarred mind cannot do its part in upholding the community and by extension the society. This is where therapy comes into picture.

As mentioned, numerous times in the book, therapy is communication and communication is therapy. The author puts forth three principles of therapy that peels away the skin of perplexity brought about by stigmatization on this concept. It is as follows:

When one shoots a ball to a hoop or a basket, they can only control the outcome for as long as they are in contact with the ball. The minute it is in projectile, factors beyond our control are at play. If one does not accept these external forces at play, they find themselves to blame, should the outcome be against them. Instead, working on the best play while having it in hand, accepting that one has done their best, gives a satisfaction beyond accomplishment even if it does not pass through the basket. Does this not tell us that the same outcome with differing reactions from us moulds us into different people post that very incident?

Addressing the core of unrest is the conflict zone. This can be within oneself, with another individual, with surrounding atmosphere and finally at large, with the society. Along with the above mentioned three principles, the author also touches upon the respective bonds and parallelisms drawn towards the party in question. Is it easier to forgive a family member than a friend? One might think along “yes, because they are family” or “no, they are family which cuts deeper”. Such differing views are simply the identity of each mind, its morality and its matrix.

To resolve these, one needs to introspect into the ties they share, moderate the judgements and platitudes to make room for empathy, differing perspectives and discard bias. Think of it as viewing the world through glass lens of varying powers, myopic or hypermetropic. It may not be apt for us to see the world through but that is someone’s outlook into the world anyway. Our minds are the mass of clay on a potter’s wheel which we mould with our thoughts and actions. What we fill into it or remove from this pot can only be our own decision.

Disengaging from such baggage of prejudice and stereotypes may also pose a challenge when looked into from the spectrum of cultural diversity of the world. The author has dedicated an entire chapter to the cultural isolation and stigma he faced as a Pakistani-American-Muslim. This comes with the heritage of a tradition that has run its course. At its genesis, it seems hard, impossible to digest. Following which in the initial stages, traditions seem bitter, the ones who like the taste of bitterness adapt into it. After a while comes the ripened sweetness, favoured by everyone. But finally, it rots, stinks and the consumer can only have ill effects from its consumption, and leaves behind the dried seed. In cases as such it only makes sense to replenish the fruit and break the pre-existing tradition.

To grow as an individual is to grow as a society. Remember the previously mentioned house of cards? The author also points to how simply listening to one another, considering the tone and mood of the atmosphere rather than just theirs and segregating your baggage between its good and bad can redeem one into a creation of the better. One cannot run or disembark their journey by throwing away their past, it is the strength anew to learn from it, reflect from it, and un-heal to either fix it right or overcome the fear of vulnerability, that shows true healing. Personal passions, goals, bucket lists and even comfort escapes aid in this journey towards self-discovery, self-love and self-acquaintance.

In conclusion, we are all sailing survivors with the same ultimate destiny but a vast ocean to trace out our paths on. The highs and lows encountered are simply the tides that juggle us further ahead towards the shore. Personally, I believe that our greatest mast is our will, will to survive and live. If one alters the course of destiny by reacquainting with one’s inner self, recognizing their strengths, moulding their characters into their own personal heroes in their stories, then there is no obstruction given that is beyond us. Our masts high, tides astride with oars that we mould from our own morals. The question is: would you be willing to pick-up this efficacious oar named ‘Float your Boat: You Have Power and Control’?

Book Available on Amazon and Kindle 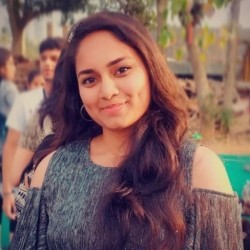 Nikitha is an undergraduate architecture student at PES University. With an exuberant passion for words, she is an avid reader, writer and critic. She loves the field of design, travel and has an eye for details, hoping to contribute her bit to the same in the future. She loves to support, listen and help for others.