“If slaughterhouses had glass walls, everyone would be a vegetarian.” -Paul McCartney

And, if the dairy industry was transparent enough, everyone would have embraced veganism, or perhaps, if the cows were capable of speaking in a language we could interpret, we would not be squeezing out every drop of milk until her udder bleeds. Shunning meat, dairy, and products derived from animals may sound like a lot to forgo. However, humans are compassionate beings. Interestingly, despite the veracity of the foregoing statement, the “all-Vegan Dream” isn’t real. This essay aims to analyse the psychological aspects of food choices and consumer behaviour in order to comprehend the conflict between our actions and the moral principles entrenched in our souls. The ‘Why’ of Veganism

Veganism is a lifestyle that intends to eliminate the possible causes of animal cruelty and exploitation. Emotional attachment with animals and the belief that every sentient creature deserves the right to live, form the core reasons to go and stay vegan. The process of converting animals in feedlot from farm to fork involves cruel practices that question the very existence of compassion in humans. Rejecting to consume and pay for animal products would drop the demand for them which, in turn, curtail the number of animals bred to suffer and decease on feed yards and in slaughterhouses. Though this doesn’t bring in an instant revolution, every little step we take leads to a bigger impact. People turn to Veganism to contribute their part; to lessen the pain and misery in the world of animals.

The happy farms portrayed in television commercials are a mere utopia. Animals bred for flesh in modern farm factories are denied even the bare minimum to survive. They are jammed into reeking sheds and denied to roam around at least for fresh air until they forget the sunshine. The worst is,  most of them die even before they hit the road to death. The (not so) lucky ones that survive the cruelty would be taken to the slaughterhouses where they would brutally be murdered to entertain our taste buds. The million-dollar question is, how even the most compassionate of people frivolously close their eyes to the terrible plight of animals raised for milk and meat?

Cognitive Dissonance and the ‘Meat Paradox’

Sometimes, the human race comes out as a real hypocrite. Largely, when the debate surrounds animals and the injustice committed to them.

Animal torture is cruel. And, what about those in your plates that would be relished without regrets?

Clearly, there is a mental conflict between your craving for beef or mutton and your moral/ethical response to the conditions of animals held for milk and meat and the agony inflicted on them. Psychologists call this, the ‘Meat Paradox’. After working for years, on comprehending the psychological gymnastics we employ to settle moral dilemmas, this term was coined by psychological scientist Steve Loughnan of the University of Melbourne. We don’t want animals to suffer though we enjoy consuming meat. The apparent way to eliminate this tension between morality and psychology is to refrain from the cause- the meat. But, how hard is it to give up on meat to practice vegetarianism or veganism for common good?- this is subjective.

Our decisions, in general, rests on two patterns. The first case -sentimental, quick, and instinctive. Here, our choices are driven by our emotions. In the second case, our decisions are rational, arduous, and explicit. Our brain looks deeper, argues/tests, and constantly analyses the rationale behind our choices.

Apparently, a vegan would acclaim the satisfaction of sparing an animal’s life and woe over the brief pleasure experienced when devouring a bucket of crunchy chicken nuggets.

The two patterns of decision-making are in a perpetual state of war, seeking consistency. It’s no surprise that, occasionally, our behaviour goes erratic. For instance, imagine the feeling of gorging on butter chicken within two weeks of taking your Vegan Pledge. In order to suppress the guilt, we try to justify our actions or deny minds to animal sufferings. Psychologically speaking, this is called Cognitive Dissonance – a mental discomfort experienced when a person holding two conflicting beliefs and perceptions attempts to achieve consistency and stability in their views and attitudes. This contradiction between one’s beliefs and behaviours nudges them to involve in acts that diminish the disquiet. This feeling of discomfort stimulates people to reject, justify their actions, or avert new information. And, we either end up giving up on our notion or action.

The capitalists never fail to take advantage of the drawbacks of humankind. The awful meat and dairy industries are thriving by paralyzing our rationality using strategies to numb our compassion toward sentient beings.

The Psychology of Crafting Marketing Strategies

Industries attempt to keep the consumers away from product origin. One of the popular strategies is to dissociate the meat from the animal. Call it ‘mutton’ instead of ‘goat’; ‘veal’ instead of ‘young calf’. This makes the ‘Reverse Analysis of Food’ from our plates to the source, as suggested in the book ‘Conversations with Vegan’ by Anātman, difficult and almost unthinkable. Another strategy employed to cover up the brutality is describing meat production by companies as ‘harvesting’ in place of ‘slaughtering’ weakens our empathy.  Moreover, labelling animals as ‘food’ lowers moral consideration significantly. ‘Cartoonification’ and ‘Cutification’ of animals deliver the impression that the meat is derived from joyful, fictitious animals. Animal-shaped biscuits and chocolates designed for kids, normalise the consumption of animals as food. These techniques are incorporated to divert attention from the realities of animal cruelty.

Our efforts to convert animals into objects to reduce our discomforts has the potential to make us effortlessly cruel. The flourishing of the animal industry shares deep ties with our behavioural changes pertaining to money. Though it is evident that the resultant of leather industries are absolute animal suffering, we don’t stop buying them and go for existing alternatives. Rather, we would buy a leather jacket or handbag that ratifies our economic status in the society. Our choice to live in the grey area recites a lot about the insecurities linked to individual identities. Our personality is consistent and morally sensible is a mere illusion and we strive to protect the same. Watch out! Seemingly, dissonance deduction has the potential to make the visible immorality of behaviours disappear. We need to deal with our moral inconsistencies by acknowledging our own hypocrisies. The process of converting feedlot animals from farm to fork not just commits injustice to animals. It poses a more complicated question on humanity and sustainability, disputing the very existence of our planet. 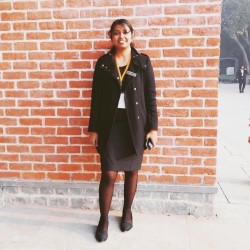 Sangamithra S is a soc major, pursuing her bachelor's degree at Miranda House. She is fascinated by the intricacies of society with an unquenchable zest to document the unnoticed deserving attention. Connect with her on LinkedIn.