Meaning of Documentary, Types, and Modes

According to Webster’s dictionary, documentary consists of written down documents. The Wikipedia defines documentary as a non -fictional motion picture with the purpose of documenting some aspects of reality, intended to maintain a historical record. In this regard, Bill Nicholas’s classic book, titled as ‘Introduction to Documentary’ can be mentioned. He identifies six genres or types of documentaries. The six main categories of the documentary films are: 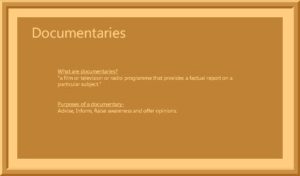 Poetic Documentaries were first introduced in the 1920’s. Their main aim is to focus on experience, images and shows people the world from a different set of viewpoint. They are mainly loose and abstract depicting a kind of feeling rather than the truth. It is individualistic and experimental in form.

Expository Documentaries are the closest relatable to the term ‘Documentaries’. It is contrasting to the poetic documentaries in a way that expository documentaries intend to persuade or inform. It is bereft of ambivalent or poetic eloquence. This form consists the television and Ken Burns style.

Observational Documentaries focuses to observe the world and the surroundings. It originated in the 1960’s with the invent of portable film equipment and instruments. They voiced almost all dimensions of an issue by giving the audience the opportunity to delve into the subject’s most important and sometimes most intimate moment.

Participatory has common characteristics of both observational and expository. They involve the film-maker with the narrative. The film maker’s voice can be heard at the back of the camera, prompting the subjects with various questions. Thus, the filmmaker directly impacts the crucial roles of the narratives.

It is a unique and inventory combination of styles used to share a poignant message to the world as well as to stress on subjects with experience. They often affix personal accounts and experience placed closed together with the prodigious historical and political concerns. This has also been referred to the ‘Michael Moore’ style, as he often depicted the social constructs of truth using his personal stories.

Cinematic documentaries involve innovative cinematic devices, utilizes the appropriate articulation of opinions. It takes into consideration the viewpoint of the filmmaker and the creative aspects of film-making. Whereas the journalist and rationalist view are based upon verifiable facts. It mainly employs eyewitness testimony and questions the plausibility, of the filmmaker’s opinion. Here, the film-makers creative aspect is subject to rejection.

Bromhead wants to depart from the complications of “objectivity and truth” and instead, she wants to focus her emphasis on the issues of narratives and the “relationship to be represented”. She fathoms that, the documentaries “claim to the real” is subjective and can never be objective in its true sense. Here, the subjectivity of the film-maker always comes to the fore.

Linear Mode: It includes Classic or Hollywood storytelling; it is character-based and it involves three-act structures, as it revolves around the arc of conflict and story-telling. Examples: Primary (1960), Drew and Leacock.

Discursive mode: It involves priority to information and it is typical of current affairs documentaries, political documentaries. It may give more scope to cinematic concerns rather than purely journalistic filmmaking. It often relies on archives to elucidate the story. Examples: The War on Democracy (2007).

Episodic mode: It juxtaposes circumstances that have no causal or narrative relationship with each other. It is often enjoined by a single dominant theme or idea (e.g. the seasons). Examples: Nanook of the north (1922) and Robert Flaherty & Hospital (1970) – Frederick Wiseman.

Poetic Mode: It consists of audiovisual poetic associations. It shuns the conventional narrative logic or a specific storyline. It takes into consideration poetic structures such as metaphors and disjunction. Examples: Listen to Britain (1942) – Humphrey Jennings & Rain (1929) – Joris Ivans

Hybrid mode: It encompasses the diary film and the road movie. Diary film counts the one dimensional logic of processing of time. Examples: Tarnation (2003) – Jonathan Caouette. Road Movie brings in a physical journey that is used to structure a narrative in an episodic format. Examples: Don’t Look Back (1966)