The human environment is something that has been focused on in general by many academicians, writers, and scholars. The human-environment interaction has been a topic that too has been discussed in particular over a long time; specifically, more so in the recent years. For instance, scholars have focused on the social, economic, and political causes of people needing to protect themselves from a contaminated environment as well as the social, economic, and political effects of such pollution.

While the focus of demographers has been on how human population affects the environment, sociologists centred around the connections between population size, human organisations, the environment, and technology. The sociological viewpoint urges us to look past what we take for granted in our social lives and to explore them in novel and imaginative ways.

The technological advancements that have been taking place in the recent decades have drastically improved the quality of life across the globe for a significant amount of the global population. With this, however, other new issues have risen that gradually impact human health and environment with the most prominent one being pollution. The introduction of materials or energy that have a negative impact on the environment and living things is referred to as pollution. There are many different types of pollution, most of which are a result of anthropogenic causes. Globalization, which has caused the earth’s surface to gradually alter as a result of humanity’s ongoing demand for natural resources, also contributes to pollution.

From a sociological point of view, the issue of environmental degradation due to pollution is further explored from the perspective of the main contemporary sociological theories, namely, Functional Perspective, Conflict Perspective, and Interactionist Perspective along with the theory of Risk Society.

Functionalists look at the whole system and its parts, whether they are studying a social system or an ecology. Our ecosystem has constantly been disrupted by industrial and agricultural ways of production since industrialization first appeared in a civilization with fewer people, less financial wealth, and an abundance of natural resources. But as a result of modern industrialization, more people are chasing fewer natural resources since more resources are used to make fewer people more productive. Even while agriculture, industrialization, and related technologies have enhanced the quality of our lives, humans have to deal with the negative effects of waste, pollution, and the depletion of natural resources. The Earth’s climate and ecosystems are now largely influenced by human activity.

The impact of any human group on the environment, according to biologists Paul and Anne Ehrlich, is the result of three distinct elements. The population comes first, followed by the typical person’s resource consumption or level of wealth, and last, the extent of technological harm.The Ehrlichs present a final formula: Environmental Damage = (Population Growth) × (Level of Affluence) × (Technological Damage).

The conflict viewpoint places special attention on the evolving social dynamics. It focuses on the disparate interests in society. This sociological viewpoint maintains that social unity is a fiction supported by force and that many of the arrangements are not necessary nor justifiable. According to this sociological theory, human competition for wealth, power, and personal interests are to blame for environmental issues like pollution. The fight over destroying (or saving) our natural environment has been linked to our capitalism economic structure as a major contributing factor. The continuation of this battle is guaranteed by competing political and economic interests.

According to J. Clarence Davies, the capitalist system encourages pollution, simply because air and water are treated as infinite and free resources. Polluters rarely take into account who or what is impacted by environmental issues. If a paper mill pollutes a river, it doesn’t affect the paper mill directly; instead, it affects those who utilize the water or people who live downstream. If a power plant pollutes the air, it only has to pay for the expense of clearing up the polluted area and not for the cost of using the air. The idea that more is better has been mixed up with a greater standard of living. Politicians advocate for reduced taxes so that we can spend more money. However, growing consumption necessitates additional energy and production, which harms the environment. Polluters prioritize those with the least influence. Robert Bullard defines environmental racism as “any environmental policy, practice or directive that differentially affects or disadvantages individuals, groups, or communities based on race or colour.

According to the feminist perspective, the dominance of women and nature is a result of a masculine worldview. The main feminist theory used to explain how people and the environment interact is called ecofeminism. “Men driven by rationalism, domination, competitiveness, individualism, and a need to control, are most often the culprits in the exploitation of animals and the environment.” According to Cynthia Hamilton, social injustice issues involving women, people of colour, and the impoverished are mirrored in environmental disputes.

Vandana Shiva focused on the socioeconomic conditions in India following the arrival of the colonizers. She contends that they established a gendered division of labour in which women were in charge of all home responsibilities in (non-money based) subsistence economies while men were employed in cash-based economic connections with the colonizers. Maldevelopment initiatives brought about material poverty where there had never been any before by eliminating subsistence economies. Shiva claimed that this resulted in the actual “feminization of poverty,” the oppression of women, and the degradation of nature.

While the functionalist and conflict perspectives focused on the macro or large-scale structure of society, the interactionist perspective has traditionally been more concerned with the micro or smaller-scale aspect of social life. Interactionists emphasise that humans are social creatures who live in communities. In essence, symbolic interaction is concerned with how meanings develop through interaction. Its main goal is to examine the deeper meanings of daily existence through careful observation and close familiarity in order to get insight into the fundamental patterns of human interaction.

John Hannigan describes, the successful construction of an environmental problem (such as pollution) requires six factors:

From the symbolic interactionist perspective, one can conclude that environmental issues qualify for the adjective “social” because of the various players of the society involved.

The risk society is one of the most ambitious, comprehensive, and contentious social theories of risk, having been created by sociologists Ulrich Beck and Anthony Giddens. The shift from the contemporary industrial society to a new era marked much more by technical hazards is the focus of this grand theory of society. The risk society is defined more by the distribution of “bads” such as pollution, contamination, and other similar by-products of production, than it is by the distribution of “goods,” primarily wealth. Contrary to “natural” dangers, which have traditionally been the focus of hazards study, these technological hazards are thought to be avoidable because society produces them. However, both categories of dangers are “social” in the sense that their effects are either exacerbated or reduced by social, economic, political, and cultural institutions. Risk to human health from the environment is therefore seen as a social construct.

According to Beck, the industrial society creates numerous risks. Here, pollution plays a significant role in the lengthy list of concerns. Other instances include congestion, traffic and crime (urbanization, inequalities). The creation of products and the distribution of wealth were the two main issues in what he referred to as “modern” society. Unfortunately, this method has resulted in the mass manufacture of risks, and they are not dispersed at random. In other instances, they might even be global in nature—something that happens in one region of the world may have an impact on individuals in another, and even the ones who create hazards might find themselves in danger.

Functionalists emphasize the need for people to become more aware of both the latent and manifest effects of their actions on the environment in order to prevent this harm to the ecosystem. An equilibrium or condition of balance will result from such vigilance.

Radical reduction of environmental degradation primarily due to various kinds of pollution should involve extensive and concrete actions from the States as well as international organizations, civil society and companies. Environmental, social, and economic factors, along with resource components should all work together in order to reach that state of efficiency. In order to support the best possible use of technology, reviewal and development of policies become imperative. This would ultimately lead to improvement in the living standards of people and the sustainable management of available resources in such a way that environmental resources have the space to replenish for the sustenance of the present as well as the future generations. Creation of mechanisms to facilitate the active involvement and participation of all concerned, particularly communities and people at the local level in decision making on the utilization of available resources and efficient use of technology.

Escalating environmental issues cannot be stopped easily. However as discussed before, if all the members of society collectively work and give their best towards the achievement of the Sustainable Development Goals, to which pollution is a significant hindrance, success can be achieved in terms of alleviation of environmental degradation owing to pollution. 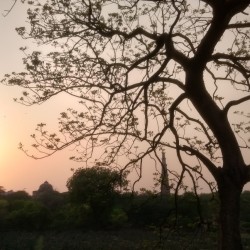 I graduated in Political Science from Gargi College, University of Delhi. I am a sociology enthusiast and an avid reader, and I was also a part of the Creative Writing Society during my graduation.