Political economy is the branch of social science that analyses the correlation between the state, markets and society. It borrows ideas and theories from political science, economics and sociology.

The term ‘Political economy’ itself is derived from Greek words polis meaning “city” or the state and oikonomos which means “housekeeper” or the one who manages a household. Here, the state is the household of the citizens. Thus, political economy is the study of how to manage a state taking into account its political, economic and social characteristics

Political economics helps us to understand the formulation and execution of public policies and their effect on the economy as well as the social systems.

Political economy as an academic discipline dates back to the span from 16th to 18th century, during the period of mercantilism. It is an economic system advocating the idea of maximizing exports and minimizing imports for the economic prosperity of the nation. Mercantilists also believed that state action is necessary to optimize the stock of assets of a country.

Political economy developed majorly as a reaction to mercantilism during the mid-18th century. Political economists like Adam Smith emphasized that free markets possess the ability to maximize the resources of the country rather than a strict state regulation on production and consumption.

The famous concept of the invisible hand was given by Smith in his book “An Inquiry into the Nature and Causes of the Wealth of Nations” (1776). He argued that individuals are motivated to act in accordance with their own interests but in doing so, the outcome is automatically in the best interest of the society as a whole. The output generated by a free economy is always greater than that of a state-regulated economy.

Further, in the 19th century, David Ricardo, an English political economist forwarded the notion of comparative advantage. It says that a country should produce goods which it can make at a lesser cost than others and import those which other nations can generate more profitably.

In the mid-19th century, communist economist and philosopher Karl Marx presented an analysis of political economy which was majorly based on the social class. This theory came to be known as “communism”. Communism is a socio-economic and political ideology that aims to establish a classless and stateless society. It advocates for the common ownership of the means of production without the influence of social class and the government institutions.

Later in the early 20th century, Alfred Marshall’s approach led to the bifurcation of political economy to a distinct field of studies as economics, political science, sociology and international relations. Economics has come out to be more methodological, statistical and far off from moral philosophy. It has become more market-centric. While political science has emerged as a distinct field which is considered to be primarily disconnected from economics.

All the works of these economists have led to the creation of what political economics as a field of study is. It constitutes the analysis of the relation between the economy and politics both in the domestic and international domain.

Owing to the history of its development, the political economy focuses on the following three approaches: –

In this approach, we study the role of economic structures, political systems and government institutions and their impacts on each other both globally and within the nations.

The modern method of study emphasizes on the further discussion of the economic policies formulated by the government rather than limiting only to their analysis as a theory. It rejects the interest of the market and political institutions and upholds the purpose of political and economic systems solely for society’s welfare.

This area of study analyses the economic interdependence among various countries, influenced by their political ties. Hence, it is also called the global political economy. It includes the understanding of international trade, the working of imports, exports, custom duties, trade surplus and deficits.

WHY IS POLITICAL ECONOMY IMPORTANT?

Political science and economics are inseparable and this is relevant more than ever. Our political environment, economic systems and the social construct are closely intertwined and go hand-in-hand. To have effective and desired results, a holistic understanding of all is required. Political economy efficiently integrates all these areas of study and facilitates the analysis of various socio-economic theories such as capitalism, communism, socialism, liberalism etc.

For example, in today’s world, the majority of nations are a mixed economy with a slight inclination to one of them. India’s economy is a combination of capitalism and socialism. Resources are owned both publicly and privately. Government controls the economic activities of essential sectors such as water, electricity, defence, and partly the health and education. Others are dominantly operated by private firms and left to the guidance of the invisible hand. But capitalist markets fuel the disparity between the rich and the poor. This is where the government institutions have to interfere to ensure an equitable distribution of wealth across all levels of the society. It is achieved by the imposition of taxes and subsidies and other aids and incentives. The exercise of these methods to their maximum utility requires government policymakers to have the all-round knowledge of the economic condition as well as the social structure to which the citizens are bound to.

Furthermore, the scope of political economy is not only confined to the boundaries of a country but also extends to an international approach. Globalization has increased the need to comprehend the relations between two nations on the grounds of the political environment as well as trade exchanges. The growth of multi-national companies (MNCs) has been synonymous with growth in employment generation. But government supervision is necessary to safeguard the interests of the workers as well. This leads to the formulation of labour protection laws and their proper execution. These characteristics of the mixed economy of India is always a choice dodging between “Efficiency and Equality”. Consider the economic output of a nation to be a pie that is to be distributed among its citizens. On favouring efficiency, the economic pie will be as large as possible but divided into unequal pieces while upholding equality will ensure equitable distribution but cause the economic pie to shrink. Thus, India’s interaction with the foreign markets involves the understanding and further argument of international trade policies and also how they affect the citizens of our country.

Political economy facilitates a holistic comprehension of these underlying affairs and enables us to make the most rational decisions. 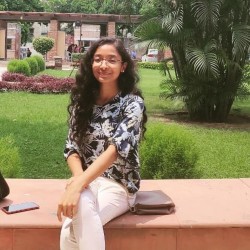 Ushashi is a content writer at Sociology Group. She is a second-year student, pursuing Economics honours from Miranda House, Delhi University. An active participant in social entrepreneurship ventures, she has also been a part of Connecting Dreams Foundation of her college. Her writing is not the only thing having a creative aspect, she's equally creative in sketching and designing, not just her work but also the lives of the people around her.